Young and awash in cash after they allegedly “made a killing” from P11.5 billion worth of government contracts for pandemic supplies, three top executives of the undercapitalized Pharmally Pharmaceutical Corp. purchased brand-new luxury vehicles valued at P52.9 million with their windfall, according to Sen. Richard Gordon.

The most expensive car, a Blu Astraeus 2021 Lamborghini Urus, valued at P25 million, was acquired by Pharmally president and company director Twinkle Dargani, Gordon said on Friday at the resumption of the Senate inquiry into purchases made by the Procurement Service of the Department of Budget and Management (PS-DBM) using at least P42 billion in pandemic response funds from the Department of Health (DOH).

Gordon, who is leading the probe as chair of the blue ribbon committee, said documents he obtained from the Land Transportation Office (LTO) showed that Dargani’s car, which dealers describe as a super sport utility vehicle, was registered in December last year.

Pharmally director Linconn Ong, who already owned a color white of the same model back in 2019, registered a silver 2021 Porsche Carrera worth about P13.5 million in May and another sports car, a 2021 Lexus RC F valued around P5.9 million, in July. 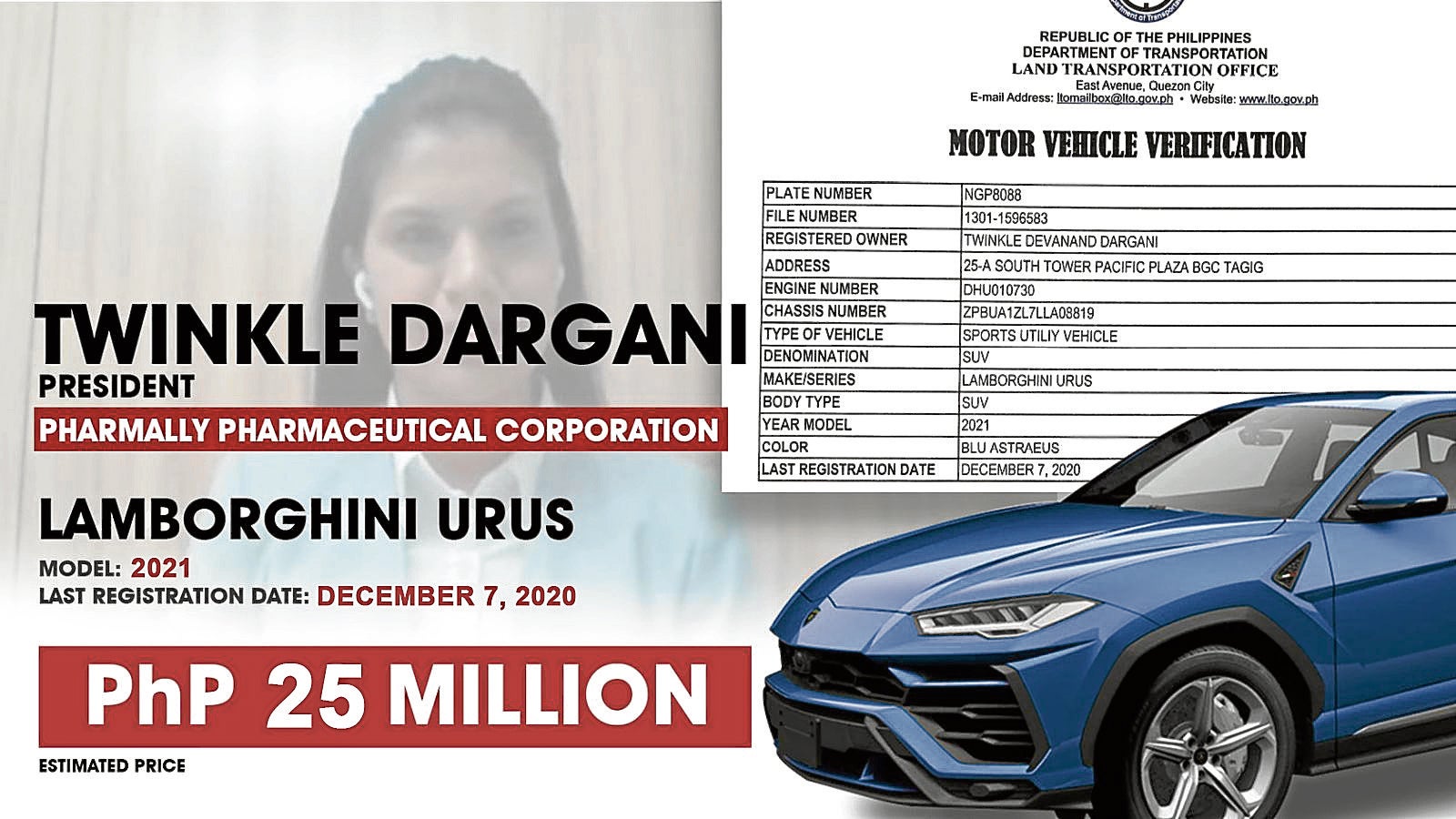 “It seems these people really made a killing, allegedly,” Gordon said.

Being only in their 20s and 30s, Gordon said the Pharmally executives already earned large sums at such a young age.

“How can you explain that?” he asked.

Of the three Pharmally executives, only Dargani’s brother, who was testifying from the United States through video conference, was asked about the vehicles during the hearing.

“Is that your only car?” Gordon asked him.

He confirmed that he owned the red Porsche and that he also had a Toyota Fortuner, a sport utility vehicle.

Asked if he also owned a Ferrari, he replied: “I don’t have a Ferrari. I only have a Porsche 911 Turbo S. That’s already up for sale.” 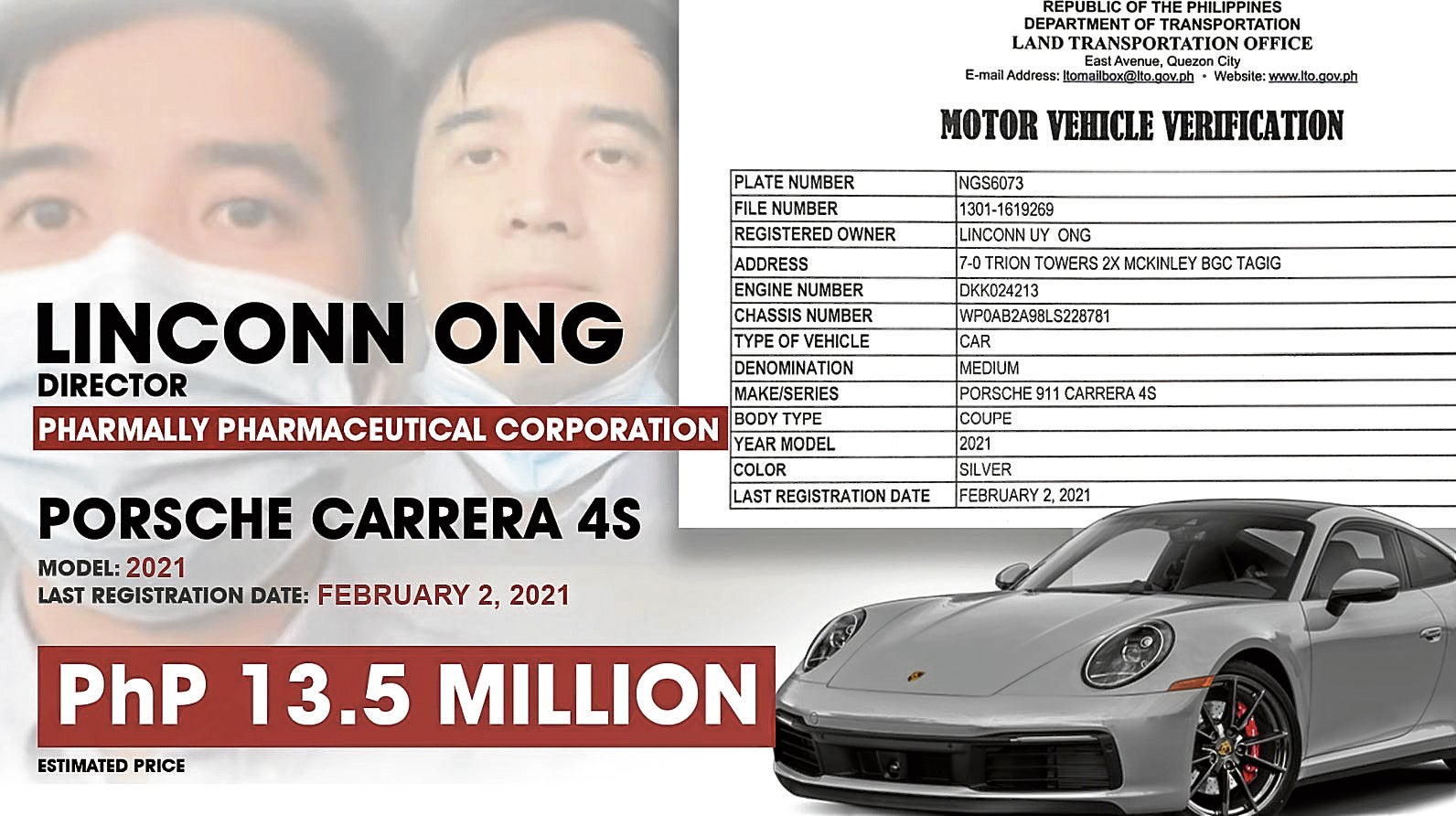 The company became the focus of the Senate investigation after it won the single biggest block of contracts with the PS-DBM from among about a dozen companies that sold pandemic supplies to the government such as masks, COVID-19 test kits and personal protective equipment (PPE) in 2020-2021 despite being capitalized at only P625,000 in September 2019.

In an earlier hearing, Senate Minority Leader Franklin Drilon said Pharmally declared zero income in 2019 and reported a net income of P264.65 million in 2020, and gross income of P384.04 million.

He also said Pharmally’s pandemic supplies were overpriced, a claim vehemently denied by the PS-DBM, DOH and Malacañang.

Drilon said Pharmally’s test kits were sold to the government at P1,720 each, nearly double the P925 quoted by its competitors. Its PPE was priced at P1,910 per set, more than double the prevailing market price then of P945, and its masks were P27.72 apiece, compared to P13.50 to P17.50 that were available, he said. 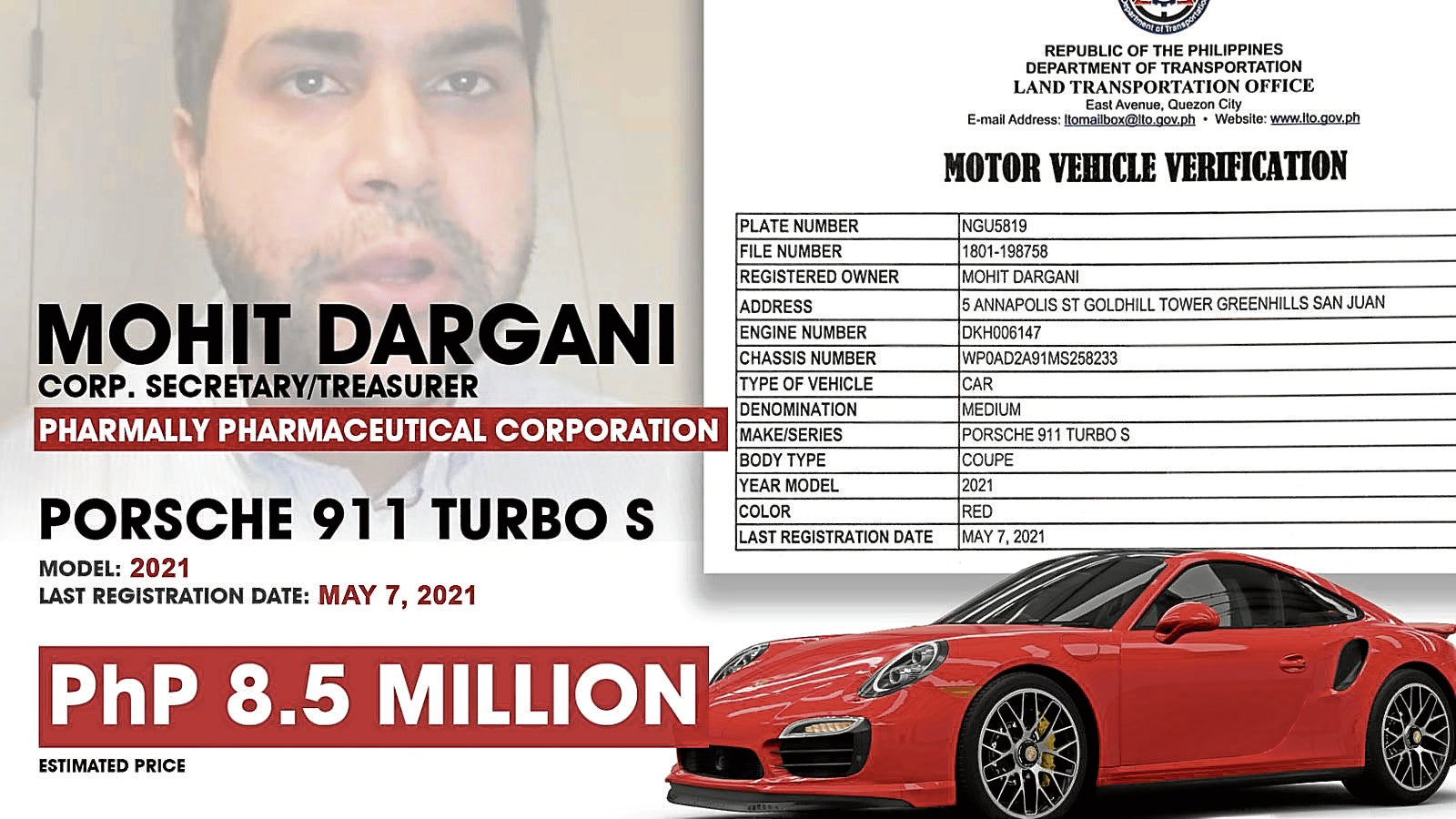 Senators last week learned that the company was struggling financially and received a still undisclosed amount in loans from Michael Yang, a Chinese businessman based in Davao and one of President Duterte’s longtime friends who served briefly as his economic adviser.

Yang testified that he had introduced Ong to his “friends” and suppliers in China.

He also admitted that he introduced the owners and officers of Pharmally’s parent company, Pharmally International Holding Col. Ltd., to the President in 2017.

Yang became controversial in 2018 after a police officer, reported that he was involved in the drug trade. But the President dismissed the allegation, saying that he has known Yang for 20 years. —WITH A REPORT FROM INQUIRER RESEARCH