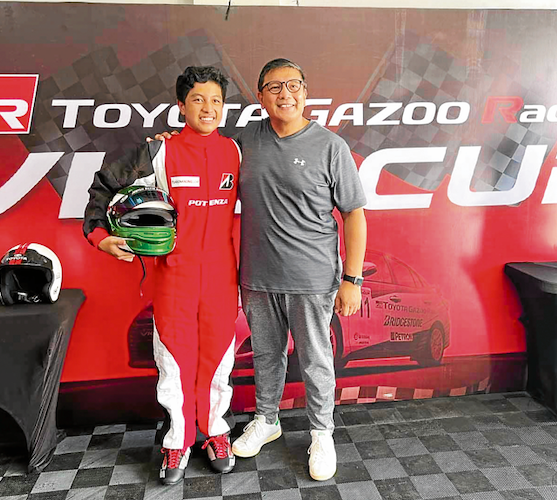 Drive slow. Such words of advice from a father probably loses half of its essence to a son who knows that the old man himself was once a devil-may-care teenager and has his share of NSFW (not safe for the workplace) stories.

Tempered by their wives or life partners, the realization of consequences, and added pressure of the price tags of responsibility, kids grow up to become who they are now. Full of wisdom, the protector of the family, and a great provider and support that help make the next generation great.

But fathers can still show their kids they can stay cool as they can be by doing something they will both aspire to once or twice in their lives. Like becoming a race car driver.

From Lightning McQueen birthday parties to Mario Kart games in Timezone, we all wanted to become race car drivers in our youth. But when everyone grows up, the dream becomes blurry when it transitions to the real world.

Here are some reasons why you should continue bonding at 200 kph.

Teach him to understand and respect speed.

Car dealer Darf Mercado is no stranger to fast cars. We have known him for several years, and he is the go-to guy for supercars. Dealing with some of the most exotic cars in the country, he knows that these machines need a lot of skill to drive, so when his son Ethan was ready to go behind the wheel, he decided they should go to a racing class.

One of the requirements of going to the Toyota Gazoo Racing Academy (TGRA) is knowing how to drive a manual car. So to prepare, Darf gave Ethan access to a manual vehicle to prepare for the class. Darf believed that by showing Ethan what a car can do at high speed in a controlled, safe environment such as the TGRA, he would understand the correct way to handle cars and respect speed.

Give him a once-in-a-lifetime experience (show how cool dad is).

Go-Kart racer Joshua Marquez went to the TGRA class with his dad Jess (shown in main photo). They decided to go to the racing class to experience and learn more about driving a real race car. My dad taught me that being smooth on the throttle and brakes is the key to being a good driver, said Joshua.

Driving the whole Clark International Speedway on the Vios racecar was a dream come true.

Teach him to know how to brake.

“The first lesson taught in the TGRA is how to brake,” according to school director JP Tuason. He said knowing how to stop is the most important lesson to go fast. The right mix of speed and braking is the trick to being fast on the track and maneuvering the corners.

Some people will go on driving for the rest of their lives not knowing how to brake correctly at the right moment. Especially with the new car technology, the correct way to brake can spell driving away unscathed or getting into trouble.

Do something cool together.

Darf, like any other car enthusiast, always dreamt of becoming a race car driver which ignited his interest in fast cars. His son Ethan never thought he would have a chance to become one until he got to do the TGRA racing class. Going into a racing class is usually the first step to getting into the Toyota Gazoo Racing Vios Cup ( TGR VIOS CUP), one of Asia’s largest grassroots racing series.

Both father and son were surprised at how the Vios race car performed on the track. Even at only 110 horsepower, it didn’t disappoint and felt fast and safe at the same time. “I have driven several fast cars that boast 300hp under the hood, but the Vios felt powerful, fast, and stable,” the older Mercado said. ‘But learning how to drive them fast makes the difference,” he added.

Happy Father’s Day to all the cool dads out there!