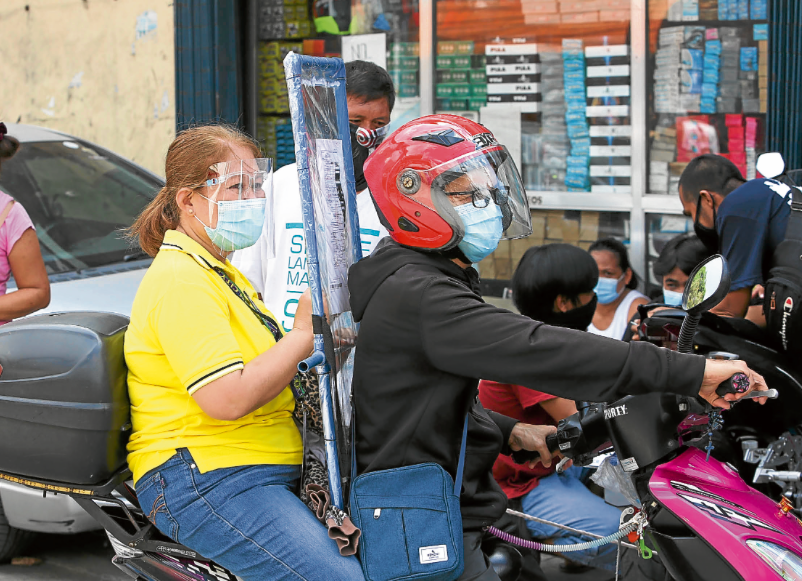 I refrained from writing about this issue, thinking that, because of its sheer absurdity, it will not see the light of day. I was expecting it would die a natural death, rejected by final decision-makers in government, because it’s downright irrational and utterly foolish. But lo and behold, it has become a national decree, criminal in nature.

I am talking about the ridiculous requirement for motorcycle drivers to install separation barriers if their spouses or live-in partners will back-ride with them.

The regulation isn’t only preposterous, it’s also anti-poor. There are more reasons to be aghast: Its scientific basis as an effective health protocol is dubious, it exposes motorcycle riders to grave danger, and it’s preventing the economy from going back on its feet.

Motorcycle-riding husbands and wives stay together inside their homes for at least 12 hours a day. Whatever distancing benefit is gained courtesy of a motorcycle barrier imposed on them is completely cancelled out by the amount of time they spend at home in skin-to-skin proximity to each other. Imposing a motorcycle barrier for couples is utterly useless, unless the government assigns policemen to sleep in between them, and to prohibit them from having sex.

The imposition of a motorcycle barrier only burdens the poor working class, because it’s they who use them as a primary mode of transport. The rich have private cars they can use without restrictions, save for the quarantine permits applicable to all. But car owners are people who have the option not to go to their workplaces because they can work from home. They are business owners or management executives who can do their jobs using the internet, phones, and CCTV monitors.

In contrast, people who avail themselves of motorcycle transport are workers who toil in factories, who labor in a myriad variety of stores (groceries, restaurants, hardware, clothing, etc.), who staff hospitals, and who perform administrative and technical services that enable businesses to function. These are the people who are critically indispensable in order to restart our failing economy. Disable them from traveling to their workplaces, and businesses will remain closed. Worse, the economy will continue to spiral downward.

Apart from motorbikes, the two other transport options for the working class are the shuttle buses provided by private companies, and the very limited, highly regulated public transport available at this time. Shuttle services, however, are provided by only a few big companies. Small businesses already on the brink of bankruptcy cannot afford to provide them.

On the other hand, the option of public transport, aside from the acute shortage, has become very prohibitive for ordinary employees. I have employees who used to spend P100 in daily transport expenses before the pandemic, but they now have to shell out P300 a day. It’s the same story in the provinces, with higher fares arising from the limited passenger restrictions.

Someone in government must keep a scorecard of the many difficulties imposed on the working class. The salaried workforce have to spend for masks, face shields, and motorcycle barriers. They’re saddled with these expenses even with their low salaries and while debilitated by no-work-no-pay rules.

One major reason many motorists are apprehended for violation of new transport rules is because they don’t even know these rules exist, because the government has no accessible website that people can easily consult on transport restrictions in their places. The Duterte administration must realize that the fulcrum that gives the right balance of health and economic restrictions rests on a sensible transportation policy.

The preposterous rule requiring motorcycle barriers for spouses appears to be the brainchild of officials with police and military backgrounds. They’ve refused to budge despite widespread opposition on good grounds. It appears their recalcitrance is a macho thing—they don’t want to admit their mistake. It’s about time sensible political leaders stepped in to bring sanity to this whole wretched affair.